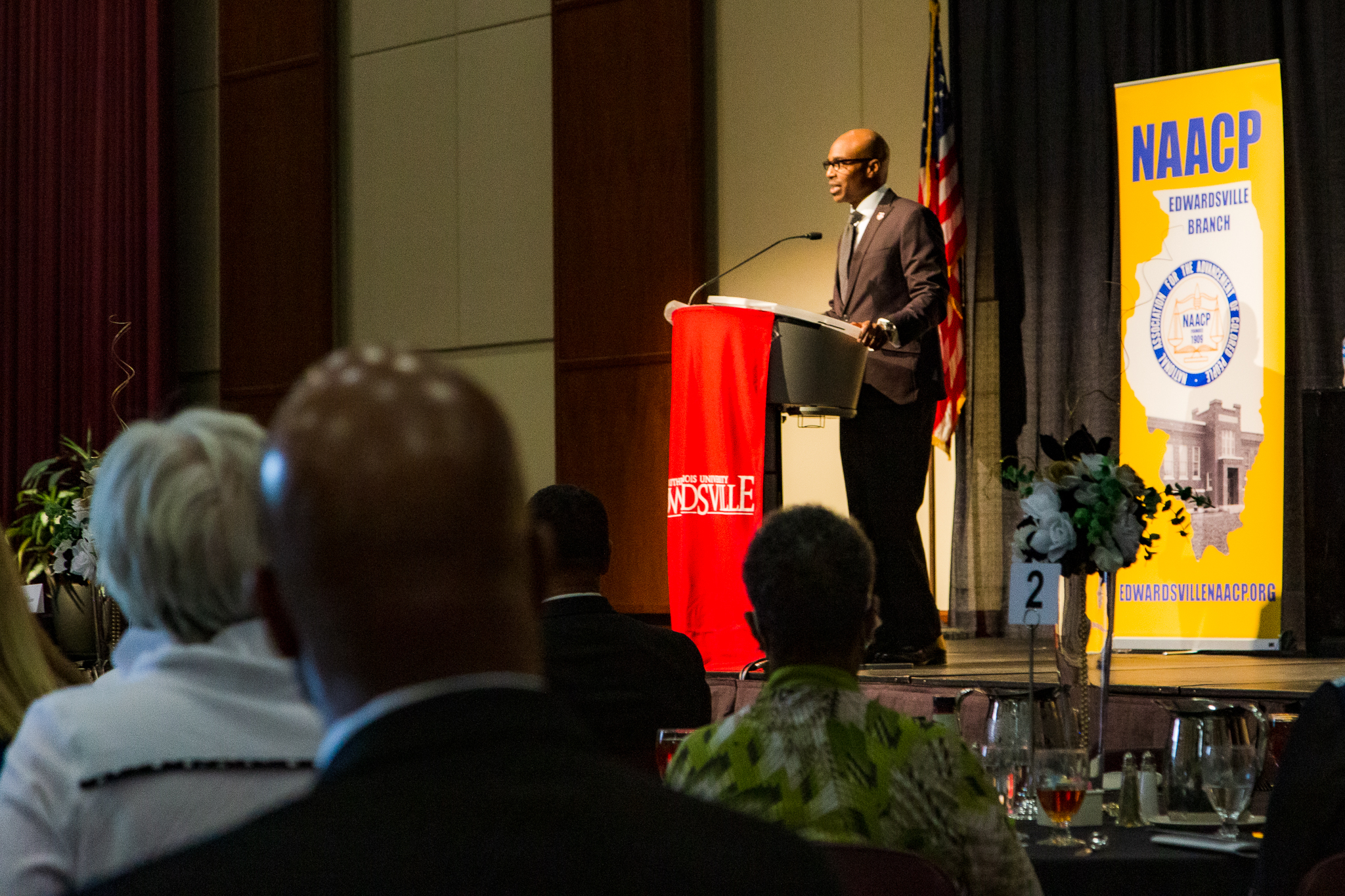 The banquet is the biggest fundraising event of the year for the organization and was held in person for the first time since 2019.

The theme was “Fighting Forward: Honoring Our Past, Celebrating Our Future” and featured SIUE Chancellor Dr. James T. Minor as keynote speaker, who became the university’s first black chancellor on March 1, 2022. .

“We were concerned about our numbers due to COVID for this event,” Edwardsville NAACP President Walt Williams said. “But the community showed up for us today and we are forever grateful. They know we are the ones giving them a voice in the Edwardsville room.

“Every community has its challenges, but we strive to do better and better,” said First Vice President Traci Daniels, who was the event chair for the banquet. “Young people are our future and we want to encourage them in every way possible.”

Much of the night focused on the power of higher education for these young people.

“Our fight for emancipation is rooted in scholarship,” said emcee Dr. Kimberly Moody, speaking of the Edwardsville NAACP, which has awarded more than $50,000 in scholarships to graduates. seniors over the past five years.

One such senior is Sean-Jeramie Brown, who graduated from Collinsville High School this year. She was involved in a number of extracurricular activities in high school, including serving as president of the Black Student Union.

“The NAACP’s dedication to African Americans and giving back to the younger crowd is really meaningful. It helps me fulfill my dream of being a psychiatrist,” said Brown, who attends SIUE in the fall.

In his keynote address, Dr. Minor spoke about the meaning of fighting and the power of ideas to bring about change.

He told the story of his grandmother being forced to pick cotton in Arkansas instead of going to school.

“And now his grandson has gone to college and become the first black chancellor in the history of SIUE,” he said. “There are doctors who are only two generations away from picking cotton.”

He talked about Elijah Lovejoy, the namesake of the Lovejoy Library on the SIUE campus. In November 1837, Lovejoy was killed in Alton defending his right to print anti-slavery material in the run-up to the American Civil War.

“Victor Hugo said, ‘Nothing is more powerful than an idea whose time has come,'” Minor said in his closing speech. “I plan to make SIUE the first and best university for students of all backgrounds to turn ideas into action.”

The banquet also included a spoken word presentation by Lashawnda Williams and musical entertainment by BOC (Band of Christians) – J Brew & the Crew.

The Edwardsville NAACP began in 1950 to integrate into the Edwardsville school system in the early 1950s, which it successfully did in 1951. Since then, its mission has always been rooted in education.

Edwardsville NAACP Secretary Debra Pitts has been with the organization for more than 40 years.

“I remember having meetings in the basement of Mount Joy Church,” she said. “Look how much we’ve grown.”

With about 10 NAACP scholarships available and three applicants this year, Pitts asked attendees to encourage students to apply next year. “We are here and we want to help.”