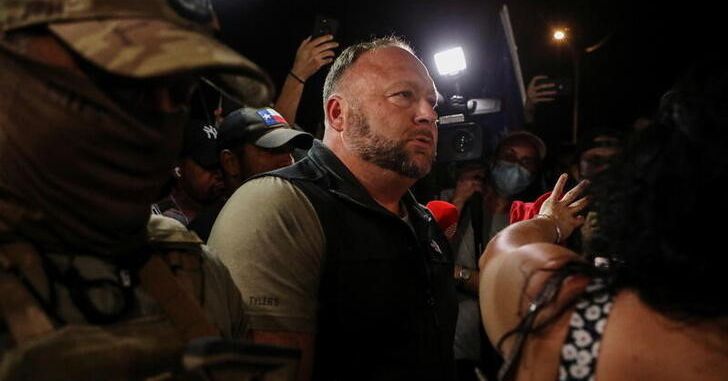 Alex Jones of Infowars watches as supporters of US President Donald Trump gather during a protest over the early results of the 2020 presidential election. REUTERS/Jim Urquhart

(Reuters) – The U.S. Justice Department’s bankruptcy watchdog suggested on Thursday that the bankruptcy of the far-right website holding company InfoWars may not have been filed for legitimate purposes.

U.S. Trustee Kevin Epstein filed papers Thursday night in Houston bankruptcy court opposing a motion by InfoW LLC to appoint two trustees who would oversee its Chapter 11 activities. A hearing on the matter is pending. scheduled for Friday morning before US Bankruptcy Judge Christopher Lopez.

InfoW and other media assets founded by conspiracy theorist Alex Jones filed for bankruptcy protection on April 17 after Jones and his media businesses were found liable in multiple defamation lawsuits in Connecticut and Texas brought by families of victims of the 2012 Sandy Hook Elementary School shooting.

Jones has falsely claimed that the shooting, during which 20 children and six school employees died in Newtown, Connecticut, was a hoax fabricated by gun control advocates and the mainstream media.

The families have previously rejected Jones’s efforts to resolve the cases.

In Thursday’s filing, Epstein said the bankruptcy case “raises numerous questions, the answers to which may show that these cases are an abuse of the bankruptcy system.” He noted that neither Jones himself nor his company that actually operates the InfoWars website, Free Speech Systems LLC, have filed for bankruptcy despite being the defendants in the defamation lawsuits.

Epstein argued that the motion to appoint two trustees is only the first step in “avoiding the burdens of bankruptcy and reaping its benefits.”

Lawyers have nominated two former Texas bankruptcy judges, Russell Nelms and Richard Schmidt, for the roles. They would each charge $900 an hour, according to court documents.

All of the bankrupt entities are intellectual property holding companies and have no control over the content posted on the Jones websites.

Jones and his companies have spent more than $10 million in legal fees related to the Sandy Hook lawsuits. An upcoming trial in Texas that would have assessed damages was halted this week.

InfoWars’ attorneys said it has “limited cash available” and that if plaintiffs in Texas tried to collect a money judgment, there would be nothing left for the plaintiffs who sued in Connecticut.

Alex Jones’ InfoWars Files for Bankruptcy in US Court

Maria Chutchian reports on corporate bankruptcy and restructuring. She can be reached at [email protected]