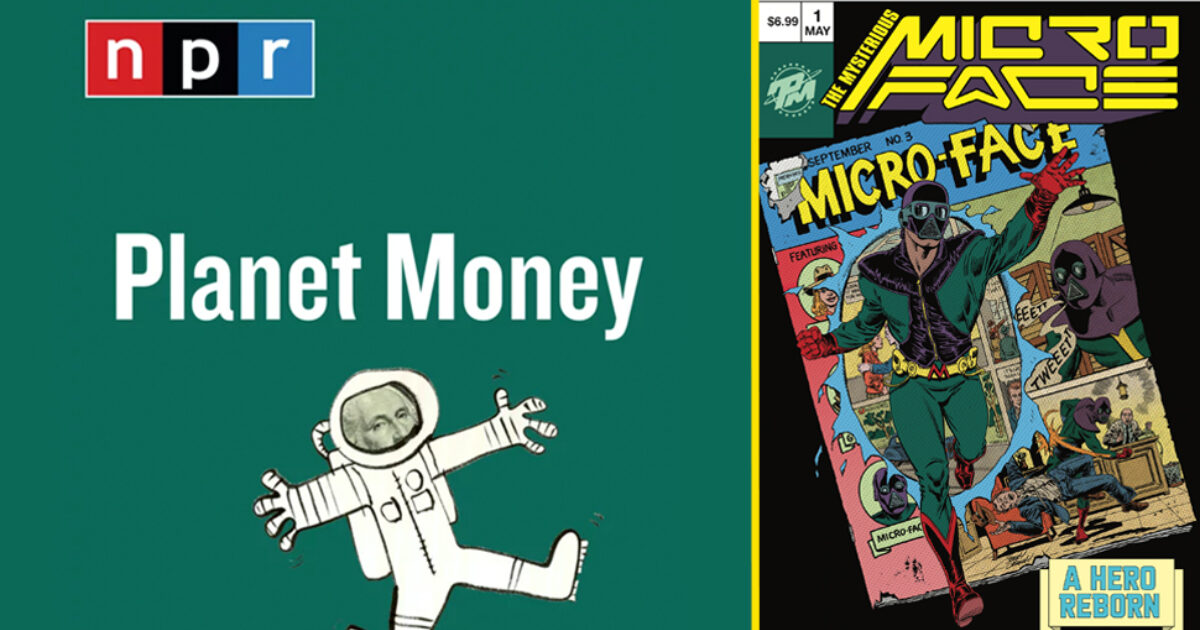 A Broadway musical might not be the first thing that comes to mind when thinking of ways to develop a superhero story from the pages of a comic book. Sure, it happened a few times, but not often, and unfortunately, not as successfully. It’s pretty safe to say that the cinematic universe is where most superheroes really thrive these days. So why the hell (or Asgard…or Krypton…) the NPR Business Podcast Silver Planet end up greenlighting a musical when licensing derivative works for their newly acquired superhero Micro-Face?

Let’s go back. We need a little origin story here to explain what’s going on here.

And, of course, each of these explorations is chronicled in a series of episodes on the podcast. It’s sort of the beginning. We always get to the musical, but first we have to get to the superhero.

“We realized that there was this huge economic story that we were kind of missing, which was that the IP-ification of the entertainment industry had turned into this gigantic juggernaut.”

When Marvel wouldn’t sell them one of their copyrighted superheroes (yes, Silver Planet tried this, as documented in the first episode of the “Silver Planet series “Buy a Superhero”), the team discovered the wonderful world of the public domain.

“The public domain is a very intentional part of copyright that encourages creativity,” says Malone. The intellectual property owner has exclusive rights for a period of time, but after that period (which changes depending on copyright law) the property falls into the public domain, allowing anyone to take that idea and make something new out of it. A “boom and bust” of superhero comics in the 1940s left a number of less popular characters with expired copyrights.

“We’ve done what I’ve kindly called ‘trash diving’ through the annals of superhero history.” And Malone and his co-host Robert Smith have found buried treasure. Micro-Face, the sonic avenger. He wore a full face mask with built-in microphones that allowed him to amplify and project his voice. “We were beside ourselves to find a character that looked like a podcaster from the 1940s,” says Malone.

So now Silver Planet has his property. They resurrect Micro-Face and hire artists and writers to create an all-new 48-page comic (“an economic adventure”) starring Sam Salazar, a talented young NPR business reporter who happens to be the little -son of the original superhero. The comic was officially released on April 22, 2022.

As part of the ongoing analysis of IP monetization, Silver Planet called on all listeners with ideas for licensing (Micro-Face branded product) or derivative property (blockbuster movie) to call and pitch. (We are now in the musical part!)

Enter musical theater composer-lyricist Kit Goldstein Grant, who was walking with her one-year-old in a stroller and listening to the podcast. “I was like, ‘Wait. Are they kidding? I know they were kidding when they said ‘a Broadway musical’ but here’s a song I could write for it.” By the time she got home, she had almost completely written the Micro-Face character’s establishment song in her head. “It’s an ‘I Am’ song…it’s a superhero and it’s all about audio powers, so it wants to spread omnidirectional good. There’s a lot of audio jokes in it,” said Grant.

“Like, so,” Malone says. “It was ridiculously good. It was so much better than we deserve.”

Based on his demo song and pitch, Grant was commissioned to write a short audio musical based on the character. Her story picks up after the comic, though she quickly gives the audience a little backstory before sending Salazar on his second economic adventure, a tax refund fraud scheme he must unravel. Malone points out that Grant draws heavily from the Silver Planet archives skillfully weaving in the subjects of previous shows, in particular “Escheat Show”, an episode about a government program for unclaimed funds from citizens.

The musical was presented on May 10 to sold out houses, live Silver Planet show in Brooklyn, where Malone and Smith recapped the whole experience, then created a concert-style performance of Grant’s work, complete with noisemakers for sound effects. The recorded episode will be available to NPR+ subscribers on July 11, then to all podcast listeners three weeks later on August 1.

Mexican actor Sebastian Treviño originated the role of Sam Salazar, leading a cast of seven for the live performance. It’s not too often that this kind of role goes from page to stage or screen with so little mythology. Treviño, of course, had the script and the comic book to build on, but really creating a new, living superhero almost from scratch left him plenty of room to explore the character. “The episode of the podcast where they talk about merchandise was extremely helpful…like, what would he do, what wouldn’t he do.” (In fact, he wouldn’t score temporary tattoos or make any mentions, but he would proudly put his face/mask on aged gouda cheese.)

Since we immersed ourselves in the world of official Silver Planet superheroes, we can’t help wondering what are the superpowers of its creators…

“I know the answer to that question,” Malone says immediately. “I’ve always had this ability to catch something that falls out of the corner of my eye. It’s legitimately something that saved me cups of coffee, it saved things from breaking. I’m very good at it. I don’t know where it came from.”

“I can turn anything into a dance party, and people go with it,” says Treviño, who is officially invited to all Playbill events.

Spider-Man Turns Out the Dark on Broadway

The sun is out, it's time to have fun