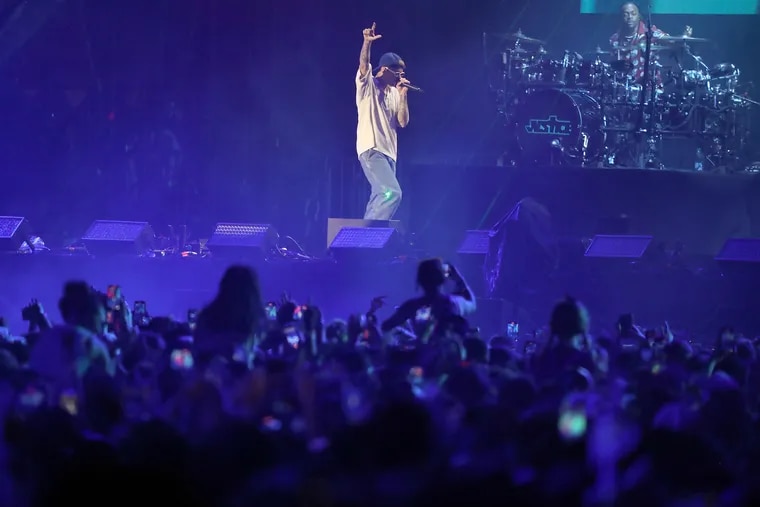 The second day of Jay-Z’s Made in America music festival wrapped up Sunday on the Benjamin Franklin Parkway, bringing the beats, the Biebs, and the rain that made people look for raincoats.

“I’m here for Justin,” said Ali Tarnow, 25, a Boston nurse who was in town to visit her friend Casey Marola, 24.

Both vaccinated against COVID-19, they downloaded this confirmation in advance to the festival organizers, but took off their masks after entering.

“It’s out there,” Tarnow said. “I feel good to be vaccinated.”

The pop star Tarnow wanted to see finally arrive on stage at 9:23 pm Sunday, not without some preliminary tensions.

Even while Doja Cat was still performing on the adjacent Liberty Stage, a stern voice came over the speakers repeatedly asking Bieber fans to step back from the stage and give their concert mates a place at the barricades.

Bieber, born in Canada, took the stage unceremoniously, wearing a baseball cap upside down and sunglasses to sing “Somebody”, the first of a quarter of the opening songs of his new album, Justice. As the second, “Hold On” was in progress, fireworks were exploding above. And the rain was falling.

“What’s going on, Philly?” Bieber told the crowd. “I am so grateful to be back here. This song means a lot to me, so let’s go.

With this, his band entered the gospel pop of “Holy” and surprised and delighted the crowd by bringing in Chance the Rapper to join him.

As a former teen sensation, the 27-year-old is particularly good at apologetic love songs. He looks like someone who has had his fair share of trouble when he asks, “Is it too late to apologize?” “

From there, the set served a bit of everything. Two guitarists flanked the singer for an acoustic interlude which was followed by “Where Are U Now?” Diplo and Skrillex’s foray into knotty electronic music. Fireworks punctuated the show.

Compliance with the city’s mask requirement was lax on Saturday, the first day of the annual two-day music festival. It was the same on Sunday.

The event, canceled last year due to the coronavirus pandemic, went off without a major hitch on Saturday, bringing a cheerful crowd of 50,000 to the sunny promenade to see Megan Thee Stallion, Lil Baby and Meek Mill.

“It reminds me of before COVID, of the way things were,” said Mark Gladkyy, 22, a senior at Chestnut Hill College, while working at the Philadelphia Eats Food Truck. “I appreciate it.”

By the end of Sunday night, 34 acts had occurred on three stages on the promenade.

Participants had to show proof of vaccination or a negative COVID-19 test to enter. As COVID-19 cases rise – fueled by the highly contagious delta variant – across the country and in the Philadelphia area, the city instituted a mandate last month that people standing in crowds of more 1,000 people wear a mask outdoors. Inside the festival grounds on Saturday, much of it seemed to go down the drain.

“Made in America – like all other businesses, institutions and events – is responsible for ensuring that the mask mandate is enforced,” city spokesman Kevin Lessard said in an email on Sunday, citing the Emergency Order mask warrant.

There are no penalties for individuals, nor will businesses automatically be fined or penalized, Lessard said.

At MIA, he said, “Event producers remind festival-goers of the mask requirement throughout the event. In addition, free masks are available in all first aid tents. “

Mayor Kenney was seen without a mask; a spokesperson said he wore a mask except when eating or drinking, as the COVID guidelines state.

By Saturday night, the nearby Vine Street freeway had completely drained from the river to the road and reopened to traffic, as was the old Kelly Drive.

Day two of the festival kicked off with a bang, kicked off by Brooklyn rapper 26 AR. It was a scene of controlled chaos on the Tidal stage when the emcee showed up – 15 minutes past the scheduled 2pm start time – with a live band behind him and a stage full of hyped men. and wizards throwing T-shirts in a pretty big start. -the afternoon crowd.

The 21-year-old Crown Heights player didn’t accept the performance: In a half hour of mad manic energy, 26 AR compared his mic mastery to that of an NFL quarterback in “Aaron Rodgers “and put the songs from his first album Soak them with relentless energy.

Made in America veteran Freddy Gibbs was the first on the Rocky stage on Sunday, starting his set under gray skies and drizzle.

Rapper Gary, Ind., 39, who last performed at MIA in 2019 with then-DJ partner Madlib was back this time on tour behind Alfredo, his 2020 album which is a collaboration with producer The Alchemist. He marries old-fashioned soul samples with crime stories from mafia movies.

“Dude, it’s good to be back on a … stage,” enthused the bearded and bald Gibbs, a gold G locket hanging from his chest, before clearly expressing his feelings about COVID- 19 in secular language.

Gibbs is a talented blacksmith and gifted freestyle rapper on a level few of the younger MIA hosts could match. He thanked members of the public who could have been arrested earlier in the week but managed to be released on bail in time to get to the festival, and brought his show to a climax with “Gang Signs”, his recent single with Schoolboy Q.

“I know it’s raining, but you’re so beautiful,” Tinashe told the wet fans who danced outside the Rocky stage on Sunday afternoon.

Dressed in bright yellow, with her four dancers, the Los Angeles-based dance-pop singer even looked like she was dressed for the weather, covering herself in a matching dress that looked like a huge raincoat.

Backed by a full band with a guitarist prone to screaming and clichéd solos, Tinashe put on an energetic show of percolating and insistent pop dance drawn from her. 333 album. It wasn’t particularly distinctive, but it was enough to keep audiences counting the hours until Justin Bieber arrived.

And no, she didn’t mention Ben Simmons, the seemingly soon-to-be ex-Sixers star she dated in 2018.

Dallas Mavericks point guard and former Villanova star Jalen Brunson was spotted in a VIP section during Moneybagg Yo’s performance at Liberty Stage. 2018 National College Player of the Year, drafted in the second round of the 2018 NBA Draft by the Mavericks, Brunson trained regularly in the Philadelphia area during the offseason.

This year’s edition of Jay-Z’s Made In America is the narrowest in terms of musical reach.

The festival debuted in 2012 with Jay-Z and Pearl Jam headlining, making room for artists as diverse as Janelle Monae and Queens of the Stone Age, as well as independent Philly bands like Alex G and Japanese Breakfast and big names like Kanye West, Rihanna, Coldplay and The Weeknd. Now it comes down to a very focused hip-hop festival, with a handful of pop or alt-R & B singers.

It hasn’t been bad for business. The MIA brand is so strong and its position as a rite of passage as one last party before the end of summer guarantees it a huge following – especially this year, with a big-circulation headliner in Bieber and desperate people. to log in after a year and a half of COVID hibernating.

But it allowed for one-dimensional listening and, without an electronic music scene this year, leaner programming.

Roddy Ricch put on a rock-solid performance reflecting his rising star stature. He showed emotional depth over moody ruminations like “Boom Boom Room” from his 2019 album. Please excuse me for being antisocial. Rapper 42 Dugg joined him on “4 Da Gang” and he demonstrated his seriousness with “Die Young”, his 2018 single which first caught the attention of Philadelphia rapper Meek Mill.

Los Angeles rapper Doja Cat – the pop star of the moment at MIA, with three top 15 songs on the Billboard Hot 100 chart – put on an energetic show backed by a full band and phalanx of dancers on the Liberty Stage.

Her punchy pop dance tunes like “Addiction” and “Woman” with a contagious Latin flavor were a crowd pleaser. They were greeted with delight by a festival filled with Beliebers who waited all day for something sweet.

“I had no idea Philly was going to be like this,” the singer said at the start, apparently genuinely surprised by the reception.

Beiber walked into the downtown Mitchell & Ness sports store hours before his set. Other buyers were invited to wait outside.

As for the neighborhood’s reaction to an event both loved and hated by those around it, it was mixed on Sunday afternoon as attendees lined up to enter the open-air venue.

Caitlyn Valentino, 34, an office manager who has lived near the 25th and Fairmount for about 20 years, was walking her dog, Rosie. She had forgotten that Made in America was coming back this year until she came home on Saturday and saw all the traffic.

“Oh that’s right,” she said, she thought to herself. “It comes back again. To pull.”

She never attended the event. It’s not too painful, she says, but there are a lot of traffic jams and they close the fields where she likes to walk Rosie.

“I think it’s good to bring business to the community, but it definitely makes it harder to live here,” he said, citing the parking and the traffic.

He’s also a little worried that so many people are coming with the Delta variant and worries that people won’t follow the masking mandate inside the event. Henning, an engineer for Amazon, has lived in the area for about six years but has never been to Made In America.

“I’m a little too old for that,” he said, as he walked home with a take-out bag from a local restaurant.

Susan Brousseau, also in the Fairmount neighborhood, said she had never been bothered by MIA.

“I think it’s really cool to be able to organize events like this in the city,” said the school administrator, who has lived in the area for four years. “That’s why you live in a city.”

She, her husband and two children strolled outside the concert hall on Saturday night and were very impressed with how well it worked. There were many garbage trucks and a heavy police presence, she said. From home, she couldn’t even hear the music, she said.

Editors Damichael Cole and Josh Tolentino contributed to this article.

It’s a developing story that will be updated throughout the night.