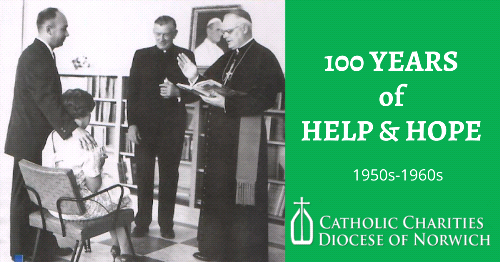 August 6, 1953, Pope Pius XII established the Diocese of Norwich with Bishop Bernard J. Flanagan as bishop. The jurisdiction of the diocese included the four counties of eastern Connecticut: New London, Norwich, Middlesex, Tolland and Fishers Island, a small part of Suffolk County in New York State. Saint Patrick’s Church in Norwich became Saint Patrick’s Cathedral with Norwich as the seat (place of episcopal residence and cathedral) of the new diocese.

The Norwich Diocesan Bureau of Social Service was incorporated as a non-profit entity in the State of Connecticut on March 23, 1954. At the same time, the offices in Norwich, New London and Middletown were to function as separate units.

The Diocesan Council of Catholic Women of Norwich was established in 1955 and continued to be the main contributor.

August 12, 1959, Bishop Flanagan has been appointed Bishop of Worcester.

Most Rev. Vincent J. Hines, JCD, Chancellor of the Archdiocese of Hartford, was appointed Bishop of Norwich on November 27, 1959.

Bishop Vincent J. Hines was ordained bishop and installed on March 17, 1960 as Bishop of Norwich. He began to consult the priests of the diocese concerning the organization of his ministries.

February 1961, Bishop Hines announced a reorganization and renaming of the Diocesan Office of Social Services. The official name of the charity program was changed to Catholic Charities, Inc. Diocese of Norwich, and called simply Catholic Charities. Official documents were filed with the Secretary of State’s office in Hartford on February 1, 1961 and certified on February 7.

The purpose of the reorganization was to coordinate the activities of the Norwich, New London and Middletown offices and adopt uniform practices. Bishop Hines has approved a new policies and procedures manual. This approval follows a series of conferences Bishop Hines held with Bishop William J. Baldwin, Diocesan Director of Charities; Father Eugene A. Solega, District Director of Middletown; and Father Robert W. Cronin, District Director for New London.

1961 – The first of many Catholic charity balls was held as a fundraiser.

1963 – The Bureau of Social Service was aware of the need and worked with Family Services of New London to start a Big Brothers organization in the area. 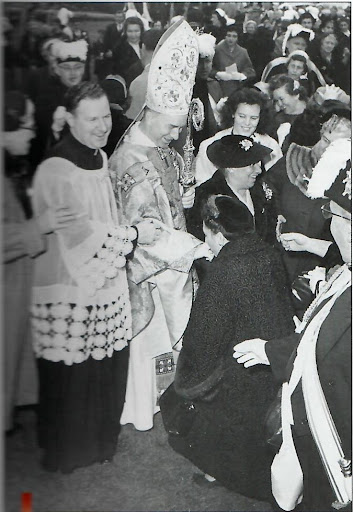 New offices have been established in Middletown at 33 St. John’s Square; in New London at 10 Pearl St., a new storefront location; in Norwich at 4 Bath St., a newly constructed location.

The advisory boards from each of the sites offered immeasurable support.

Catholic Charities was very involved in the creation of TVCCA. It provided office time and supplies during the first few months of its operation.

Photo: Bishop Flanagan greets the faithful outside St. Patrick’s Cathedral on December 8, 1953 after his installation as the first Bishop of Norwich. He is accompanied by the master of ceremonies, Fr. Edward McKenna.

Alpine-X on track for indoor ski resort in Lorton | Securities