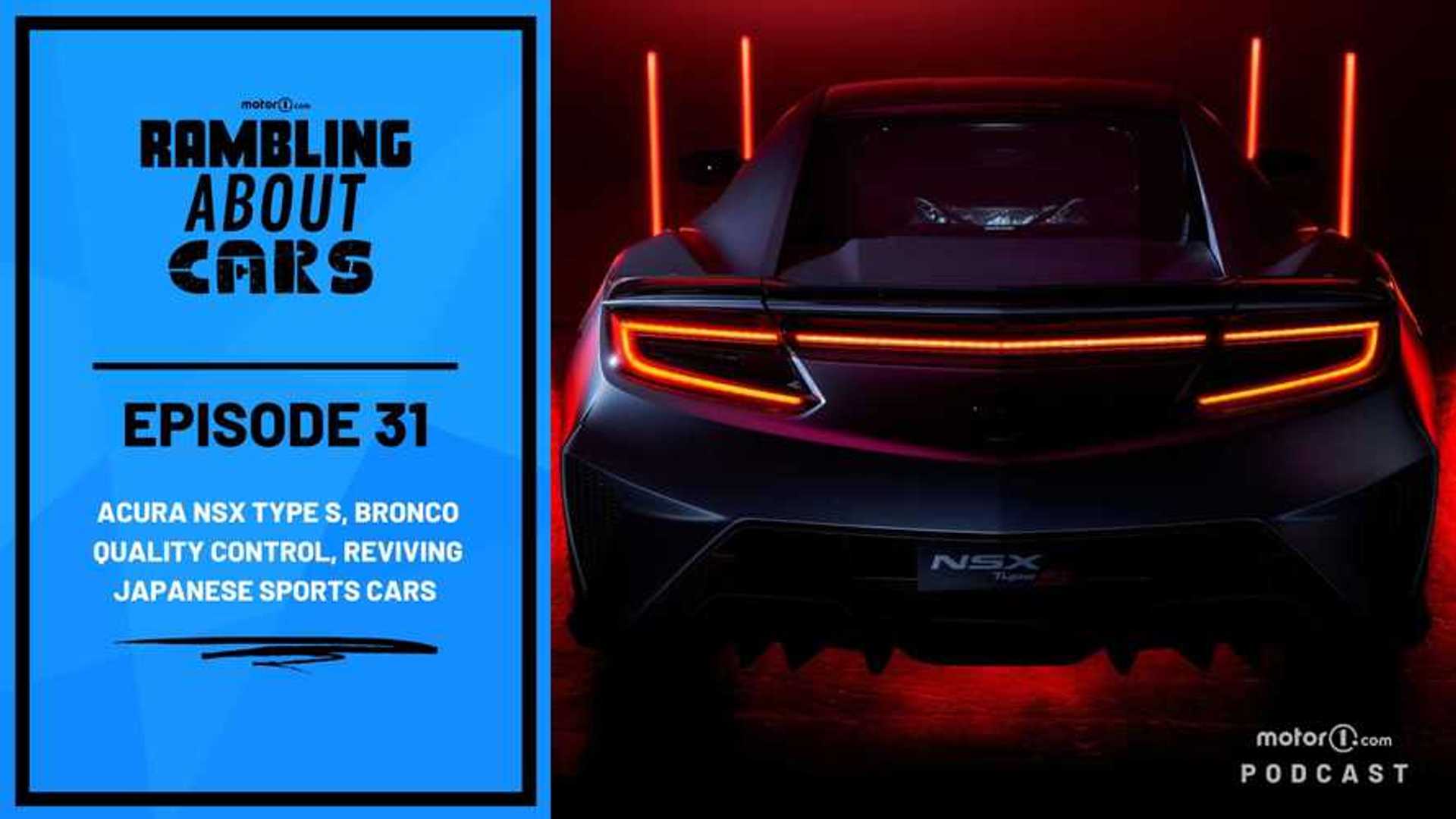 It’s podcast time, and for this special episode, Bruce and Smith are joined by Motor1.com Versatile video director and emcee, Clint Simone. The trio have a lot to say about the second-gen Acura NSX, not to mention the issues with the Ford Bronco. And it all makes them a little nostalgic for the golden age of Japanese performance. Is it the 90s … or is it now? More on that in a bit.

The podcast opens with the big performance news from last week, namely the return of the NSX Type S. Acura’s second-gen hybrid supercar finally gets the Type S treatment, and although it does debuting only on August 12, Bruce and Smith type in Simone’s Previous NSX Experience to get a taste of what we can expect.

Of course, the news from NSX is bittersweet. Along with the Type S announcement, it was announced that 2022 will be the end of the current NSX. Production will stop next December, but at least it’s coming out with a bang. And hey, there’s still time for Acura to make a Type R, right? We can dream, anyway.

The trio go from nostalgia for NSX to a litany of little Ford Bronco issues reported by owners. Problems like this are pretty typical in the first year of production of a new vehicle, but when that vehicle is incredibly popular and sells for six figures online, these issues attract attention. Smith explains several issues with whistles at highway speeds, while Bruce covers some of the issues faced by owners of Bronco soft tops and hard tops. Simone also offers insight into the Bronco’s illnesses, and although they’ve been small potatoes so far, the issues are proving frustrating for people who have waited over a year to get behind the wheel.

A commentary interlude brings the trio back to the theme of Japanese sports cars. After a long discussion about the current Toyota Supra, the hosts come across an unexpected but thought-provoking question. Most enthusiasts see the 1990s as the golden age of performance in Japan, but Simone suggests that at present is the true golden age of Japan. Vehicles like the Supra, Civic Type R, Nissan GT-R and the new Z are strong arguments for Simone’s case. But can a Japanese golden age exist without Mitsubishi?

Finally, the trio take a trip down memory lane, each choosing two missing but not forgotten Japanese performance cars that they would like to see return. You could say the obvious answer is the Lancer Evolution, but somehow Simone and Chris are avoiding the legendary rally machine. Instead, their choices are both nostalgic and poignant, as they realize that such awakenings would likely use electrical energy. That’s fine for some, but at least one car chosen is legendary for its 9,000-rpm four-cylinder. It just wouldn’t be the same without this soundtrack.

You know the chorus. We need to hear from you about the golden age of performance in Japan in the 1990s or now. And we also need to know which Japanese performance car you want to see return, even if it’s just for a brief celebration of internal combustion power. The powers that be may well be listening, and if we all come together, maybe a wish or two will be granted. Comment here or send us an email: [email protected] because we will be review this very soon.

In addition to our Motor1 Podcast YouTube Channel, you can still find us on your favorite audio channel every Friday, as always. You’ll find Rambling About Cars on all major podcast platforms, including Apple podcasts and Spotify. If you have a moment, please Like, Follow, and Comment as this exposes the show to more car enthusiasts. And the more enthusiasts who join us in this automotive odyssey, the better.

What's going on this weekend? Family fun events around Bordentown