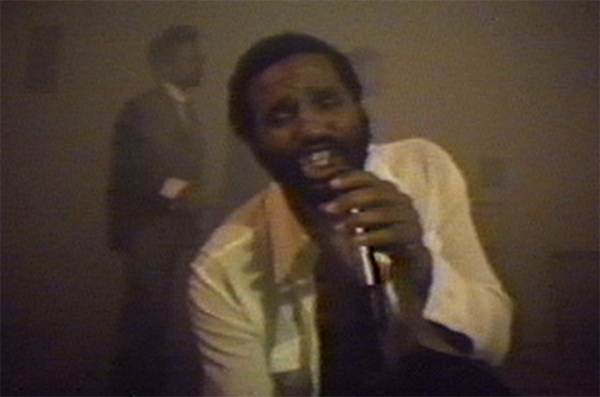 Ulysses Jenkins: Without Your Interpretation, the first major retrospective on the work of groundbreaking video / performance artist Ulysses Jenkins, is presented at the ICA this fall, From September 17 to December 30, 2021. The exhibit is co-curated by Meg Onli, ICA Associate Curator Andrea B. Laporte and Erin Christovale, Associate Curator, Hammer Museum at UCLA, where the exhibit will travel this winter.

A central influence on contemporary art for more than fifty years, Ulysses Jenkins (born 1946 in Los Angeles, lives in Los Angeles) has produced video and media works that evoke vibrant expressions of how image, sound and cultural iconography inform the performance. Using archival images, photographs, image processing and elegiac soundtracks, Mr. Jenkins brings together various currents of thought to question questions of race and gender in relation to ritual, the history and state power.

Originally a painter and muralist, Mr. Jenkins was introduced to video just as the first consumer cameras were becoming available. He quickly used television technology as a means to broadcast alternative and critical representations of multiculturalism, citing the catalyst of Melvin Van Peebles Sweet Sweetback song Baadasssss (1971) and his call on black filmmakers to control their subject matter by controlling the media that represent them. Embracing the role of a “video griot,” Mr. Jenkins draws inspiration from oral traditions in videos often structured around music and poetic recitation, as well as dynamic performances.

Requiring three years of intensive research by curators, including studio visits, the scanning of a sprawling archive, and conversations with Mr Jenkins and his collaborators, the exhibition, which was curated in close collaboration with the artist, encompasses a wide range of over twenty of Mr. Jenkins’ videos, as well as over sixty works that showcase his collaborations, murals, photographs and performances, highlighting the breadth of his practice. ‘artist.

Among the many video works included in the exhibition, Mass of images (1978), an innovative video artwork considered one of the first works of its kind by a black artist. In it, Mr. Jenkins criticizes the role of the media in perpetuating racist and harmful images of blacks in the United States. , government oppression and the impact of systemic racism on black cultural production.

The role of technology in building community is a major concern throughout Mr. Jenkins’ work. Just as the artist used nascent technology to solve pressing problems of our time, the exhibition uses current technology to capture the artist’s original intention to foster international collaboration, to increase access to experiences shared and provide a platform for marginalized voices.

Many emerging black videographers who came of age in the 1990s and early 2000s cite Mr. Jenkins as a major influence in their work. Mr. Jenkins’ groundbreaking and premonitory work is only now being revisited by academics, curators and other artists. The political and social commentary present in Mr. Jenkins’ work makes it particularly relevant in today’s context, like his questions about black stereotypes in the American entertainment industry in Mass of images (1978) and Transfer to two zones (1979) and calls for protecting the rights of indigenous groups and advocating for environmental conservation in a performance piece Bay window (1991).